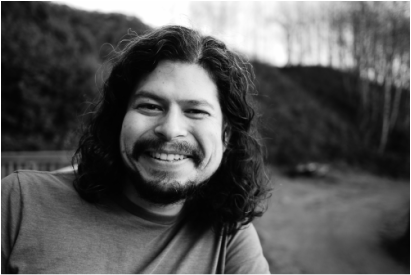 His history of cancer goes back to the atomic bomb. His father, an Air Force fighter pilot in World War II, witnessed one of the atomic bomb blast tests in his thirty year career. That's a flash of light that has followed the family ever since.

Hamid was born in Tachikawa, Japan in 1973 and has lived in Oregon since 1976. His mother was Japanese, with Samurai in her lineage. His father was a small-prop fighter pilot in World War II (his favorite was always the P-51 Mustang), then later was in communications and cryptology with top secret clearance. Hamid's uncles on his father's side were all career military, fighting in World War II, in various branches of the military; they all saw action and they all came home.

In 1991, the year of the Gulf War, after six months of stumping the doctors, Hamid was diagnosed with a rare lymphoma. There were nine documented cases before him. He was the first to live beyond six years.

Hamid has been a student of the human body since 1999, when he started massage school. Early in his career, the myofascial network of the human body became a study of fascination. Hamid brings a modernized approach to the haptic language of massage therapy. His bodywork nurtures awareness with structural listening touch, creative movement, stillness, presence, and mutual intention. The experience is a dialogue of awareness, of letting go... a guided somatic meditation. He has been in private practice since 2002.

Hamid is a licensed massage therapist specializing in cancer survivorship and oncology massage, advanced myofascial techniques, trauma release, gait function, breathing mechanics, injury recovery, and chronic pain. He is also a multi-instrumental musician specializing in improvisation and sound therapy, a recording artist, photographer, filmmaker, and writer. He is director of Compassion Arts PDX in SE Portland, Oregon. From 2015-2018, he began offering sound therapy at Veteran's Affairs as part of the Cancer Care Navigation Team. He served as a member Milwaukie Arts Committee from 2016-2021, moving from secretary, to vice-chair, to chair, serving on the platform that the arts and creative expression is an essential element in our health care. In 2020 he was named the Volunteer of the Year in Milwaukie, Oregon.
Hamid Shibata Bennett, LMT, CAMTII
3810 SE Belmont Street
Portland, Oregon 97214
Phone/Text: 503-975-1259
E-mail: hamidlmt@gmail.com